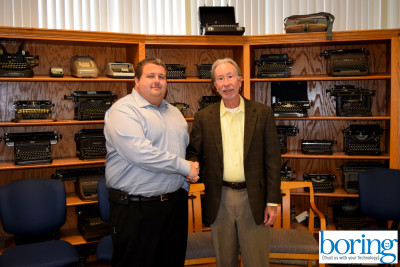 Over the Holidays, it was announced that Chris Hart has been appointed to Boring’s Executive Team, effective immediately. Hart has served as Boring’s Network Services Manager since 2012 and helped the business grow their network department significantly since then.

Chris Hart worked for Till Office Equipment in Winter Haven in various positions for over 8 years.  He handled all their copier connectivity and solutions installations. Over time, Hart’s customers were so impressed with his IT ability they asked him to work after hours on their company’s IT issues. In 2007, he started Total Network Technologies and later sold the company to Boring in 2012.

“When Till Copiers sold to BBS in 2012 I offered Chris a position as we were building a new MNS (managed IT Department).  Chris decided to continue his IT business for some time but fortunately for us decided to join Boring in December of 2012. Since then under Chris’ leadership, our MNS Department has grown 775%.  But Chris is not only an excellent System Engineer he is also a great business person and, therefore, a very positive addition to our Executive Committee.” Boring’s President, Dean Boring.